Published by Artemis Publishing on 18 August 1979 and limited to 1200 copies. The portfolio contains six large (11" x 15",) untitled, plates on heavy white paper plus a smaller Certificate of Authenticity on pale blue, vellum-like paper. These are all contained in a card folder which is, in turn, enclosed in a larger envelope. Both the folder and envelope carry the above cover illustration. Each set is individually signed and numbered on plate 1 - these are not shown on the scan below. The six pen and ink drawings are all dated 1979 and were, it would appear, executed specifically for this set. The CoA is dated 1978 and I believe that the artwork had previously been used elsewhere. 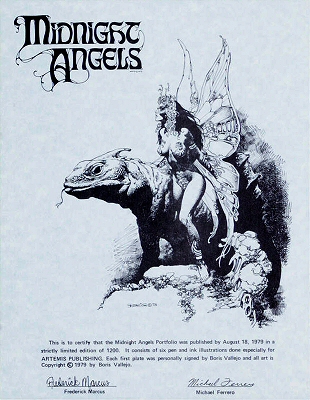